What were your thoughts on the Time Shift episodes that they did a few months ago? I personally loved all four. But, I think "Tri-Stone Area" made me laugh the most.

What were your favorite parts in each episode? If Dan and Jeff ever do it again, what time period would you like to see the PnF cast in?

I kind of liked the ancient China one. It was something different to what shows normally do with alternate universes.

And I like how even the episodes that break the formula have a formula of their own: Doofenshmirtz does something evil, the kids try to stop him, and then Perry comes in and saves them.

Although, I kind of wish Doof would play the good guy for once in these Time Shift episodes.

i liked them all, but Exacliferb the most.

i hear they may do more. i'd like a old west one, or a pirate one. doofbeard, anyone? 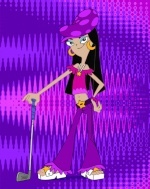 I just saw "Doof Dynasty" and "Tri-Stone Area, again. The last time I saw them were when they premiered on the Disney Channel. They were still fantastic.

Doof watching water drop from a stalactite and laughing hysterically still cracked me up.

they should make an episode about the discovery of amercia, the declaration of independence and maybe something futuristic

I thought this topic was going to be popular. I have this idea that might get it flowing again. I'll start off with the first Time Shift episode and say what my favorite parts were. Then everyone else can discuss theirs.

Tri-Stone Area
-Even though the PnF cast were talking gibberish, I actually knew what they were all saying.
-Doof watching water drop from a stalactite and then laughing hysterically.
-Doof imitating his brother Roger, who is one step above him on the evolution chain.
-Buford asking Phineas, "Watcha Doin?" and Isabella getting angry about it.
-Monogram and Carl the Monkey.
-Dan and Jeff's appearance in the episode.
-The Quirky Worky song and Doof Evil Inc. Jingle sung by Cavemen.
-Doof poking the mammoth with his stick-inator. The Mammoth then turns around giving Doof a dirty look. Then Doof runs for his life.
-Also Doof complaing to Perry (Eh, Bleh!!!)

What were your fave parts in Tri-Stone Area? Let's discuss.

Haha, I loved all that stuff! Especially when Dan and Swampy appeared in the episode. They were hilarious, as always. I also liked that they re-did Gitchee Gitchee Goo in caveman speak. I liked the harmonies and stuff better in the caveman version than in the regular version

Even though so many cartoons have done a Caveman type episode, before. I thought Phineas and Ferb's was the one out of all of them.

Absolutely. It wasn't cliche or anything, and it was a genuinely funny episode. Definitely the best caveman episode of any show.

Also, I'm very surprised that no one has drawn Doof in any of his Time Shift outfits on DA. I would of thought tons of people would of drawn him as Malifishmirtz or Doofus Kahn.

Haha, now I have to do that ;P

And yes, I liked that outfit. I liked his Doofus Kahn one too, and the general animation on Doof in that episode was awesome. (Sorry, animation dork ;P)

I actually think my favorite ep was...

I can't decide! They all had fun properties to them! Tri-stone had me loling the most from Doof being so retarded, and from Dan and Swampy showing up. Excaliferb had a very awesome monster battle, and eyeless phineas...and also had Malificent Doof. Then the China one had Perry and his flashbacks, which had me laughing so hard I choked on air (how does that happen?). And the Temple of whatchadooin had Perry smacking his tale...Which made me happy because I had drawn the very thing MONTHS before i saw the ep. LOL. Also, Indiana jones just plain rocks.

Does anyone think Doof's ancestor died in the "Temple of Juatchadoon?" I know he said his face might melt, which was a reference to one of the Indiana Jones movie.

But, my theory is that Fez-wearing Perry saved him from the Temple. Besides, Present Doof can survive all those explosions. So, why not Doof's ancestors? Someone needs to draw that. I don't care if it's Yaoi. I just think Doof "rocked" that Suit and Fedora.

I just saw all the eps as AUs and none of them are related. Did they state so, otherwise?

I just saw all the eps as AUs and none of them are related. Did they state so, otherwise?

What do you mean by that? I just saw this on someone's Tumblr. http://fedorabow.tumblr.com/post/25107805238/and-then-he-was-killed-on-that-very-spot-the

I just want to know if anyone thinks Doof's Ancestor in that episode died or if Fez-Wearing Perry saved him? I want to hear people's theories on the subject.

I was just asking did the show or creators actually say that it was Doof's ancestor. Not to debunk a discussion, i was just generally curious. because I honestly don't recall if it was said or not.

I don't think they mentioned it. But, Ohio (Phineas) called him Doofenshmirtz. Plus, he looked and acted like Doof. So, I thought, he could be Doof's ancestor along with Doofengung, Malifishmirtz, and Doofus Kahn.

All of the AU episodes are AMAZING. So many brilliant moments in all of them, many of which were already listed. Great writing, timing, songs, jokes, and everything.

And YUS, Doof was SEX-AY in that suit and fedora.


In 'Temple of Whatchadoon', I LOL so hard at Doof's "WAY too soon for a come-back, Norm!" when they're stuck in the snow, and Norm starts sarcastically slow-clapping him. And Perry's entrance later on... AWE-FREAKING-SOME.

I thought 'Tri-Stone Area' was a rather risky one in some ways, and it was certainly the most unique out of the AU eps, but it WORKED. It was just a fun episode all around, and what made it so hilarious was the fact that Dan and Swampy just kinda went for broke and allowed the episode to take itself even less serious than usual, without it come off as awkward, annoying, or out-of-place. And, when done right, that's a really good thing in cartoons. It just worked, what can I say?

In 'Excaliferb', I love thought the 'Carl reading to a sick-in-bed Monogram' was hilarious, and how that episode parodied various things- and without coming off as too over-the-top or too much all-at-once. And I LOL so hard at the battle song near the end- "OH, WAIT, HE'S UP AGAAAAAIN!"