I would love to hear or see that this is true, just for the sick that i love both characters and it would bring some shocking ending to the series (even though i hope it never ends), Perry would have to totally resin from OWCA (i guess, i don't think he would like to fight his owner father) and everything would make sence.

A theory that i came up to, to support this is that maybe Linda married Mr. Flynn and had Candace but Mr.Flynn died in an accident or maybe they just divorced, years later Linda married/ or got together with Doofenshmirtz (Doofenshmirtz obvious had already divorced Charlene and had Vanessa) Linda was pregnant with Phineas but unfortunately things didn't work out with Doof, so they split out and then Linda met Lawrence.

that's just my personal theory, what do you think?

Well honestly, I really don't think that Doofenshmirtz cold possibly be Phineas' real father. For one, both Phineas' and Candace's last name is Flynn. Just to give an example, it's similar to my family's situation. After my Mom and Dad got divorced, she later married my step-dad, but I still kept my birth father's name, the way Phineas and Candace did with their father. I mean, a step-parent can adopt his spouse's child, but they would still have to have their biological father's name some where still in the name. ((for example, my maiden name is Marisa Hillis, my Father's name is Tim Hillis, and my Step-father's name is Eddie Watkins. Therefore, my name would've had to of been Marisa Hillis Watkins, or something like that. But my step-dad never offically adopted me because I wanted to keep my maiden name.))

And also Doofenshmirtz's daughter Vanessa is about the same age as Candace. He may be a comically-evil scientist, but I don't think he would cheat on the person he was with. I mean he's had his heart broken so many times. Also, if Doof was his father, don't you think that he would've been in his son's life? Seeing as how he practically smothers Vanessa with love, I don't think he would just leave knowing that he had another child. He's evil, but not THAT evil XD

Though I agree they do share a few similarities like the shape of their heads, and their knack for building/creating contraptions and devices. However, that doesn't necessarily mean that they father and son.
:3

I really like the idea, but there's too many things in the way. And I think it's been officially debunked. I did come up with a way where it could sort of work, but it's not really within the tone of the show.

There are a lot of parallels between Phineas and Doofenshmirtz though, and I wish the show would explore them more.

but I still kept my birth father's name, the way Phineas and Candace did with their father.

I can give you evidence that Doof is not Phineas and Candace's Father. One, in "What do it Do," Doof ruins his date with Linda. He didn't even get to first base with her. Second, I went to this thing with the PnF cast, in July of last year. Dan and Jeff clearly stated that Phineas and Doof are not related in any way.

I'm personally not a fan of the theory. mostly being i just find it OOC for not only linda not telling the birth father about their son...but i can't see Doof not being a part of his own child's life. his upringing was so crappy, it's like he strives to be a better father for his kids. Not only that, but timing just wouldn't work. we've seen in an ep that Doof was still making inators at home, down the hall, when Vanessa was a teenager. (I believe it was the McGuffin episode.) And i don't see doof as the type to cheat. Suuure, he's eeeevil...but he isn't a bad person. (LOL. that makes sense, riiight?)

It's a very interesting theory, and I am one of the many who believes it makes a LOT of sense. Unfortunately, I heard that Dan and Swampy themselves have denied this rumor.

Snark raises some excellent points, too.

I love it in fanfiction, but it's not going to happen on the show. Not only are there so many details in the canon that debunk any reasonably possible explanation, but I believe Dan and Jeff have directly stated that Phineas and Candace have no relation to Doof whatsoever. Can't argue with Word of God (pardon the TV Tropes vocabulary). 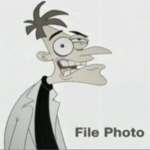